It’s closing in on Christmas and you’re excited about the beef tenderloin you’ve got planned for Christmas dinner. That perfectly trimmed tenderloin might end up as succulent steaks or a more traditional Beef Wellington. If you’ve trimmed your own whole tenderloin, not only have you saved a considerable chunk of change, you’ve also go the makings for the perfect appetizer, either Christmas day, or New Year’s Eve night.

Looking at a whole tenderloin, trimming and cleaning it might seem a bit daunting. But it need not be so. The tenderloin is actually several different muscles held in place with tendons, fat and other connective tissue. Parsing all this will give you the tenderloin with its various steaks or roasts and the “chain” or side loin. The sideloin runs the entire length of the tenderloin, but since it’s so intertwined with connective tissue and fat, it’s not usable as part of the steak or tenderloin roast. It is, however, exactly what we want.

Once the sideloin is removed, the tail end of the tenderloin is pretty obvious. At least 6 inches of the tail will probably be too narrow to cut into steaks, and it’s certainly not what you want in your Beef Wellington either. But the tail end is just what we need as well. The butt end of the tenderloin has two other muscles that need to be removed in order to clean up the silverskin on the tenderloin. The smaller and flatter of the two will also be put to use in our rumake.

Of the usable pieces of beef, we need to cut these into inch and a half cubes. Pretty much a two-bite appetizer. Any smaller and the beef will end up over cooked and tough before the bacon it’s wrapped in is properly cooked. Any pieces of beef smaller than this, along with all the fat, silverskin and connective tissue should go in a large saucepan with a quart of water and simmered covered for several hours until all the fat has rendered and the connective tissue has dissolved. You can strain the meat from the liquids, and then the fat from the stock.

A piece of green onion, a slice of water chestnut and a thin strip of bacon complete this appetizer. A sweet bourbon sauce, made from the pan drippings tops these appetizers perfectly.

Trimming your own beef tenderloin makes more than economical sense. You’re in possession of some of the most tender morsels of beef, perfect for a nosh in a bite or two.

Preheat the oven to 400°F. Season the beef tenderloin cubes with kosher salt and fresh ground black pepper. Roll one slice of bacon around one cube of beef, a green onion slice and a water chestnut slice. Secure with a toothpick. In a large oven proof skillet, brown the bacon-wrapped beef, turning once, about 2 minutes a side. Do not over cook. Brown the beef in batches if necessary. Return all the beef to the skillet and finish cooking it in the oven for 7-8 minutes. Remove the beef from the skillet, plating it on a platter. Set aside.

Turn the burner on to medium-high under the skillet. Add the bourbon, brown sugar and vinegar to the pan, scraping up the brown bits. Bring the sauce to a boil and allow it to bubble and reduce until it’s syrupy, about 5 minutes. Pour the sauce over the rumake and serve immediately. 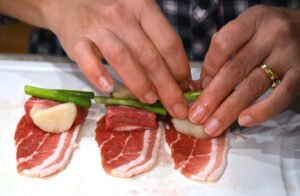 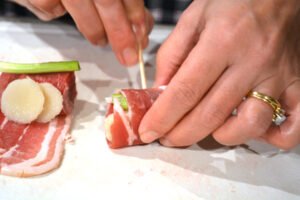 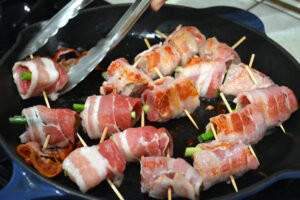 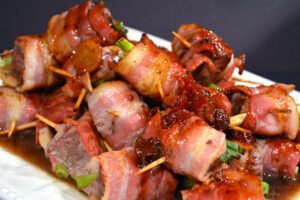