Each year, a large percentage of the population rings in the new year with a lofty resolution that sounds impressive when it’s retold to one’s friends. Resolutions ranging from spending more time with one’s family to losing weight or going back to school are the norm. Presumably, though, the barriers to achieving these goals are still in place come January 2nd. Either your family lives a considerable distance away or one or both of your parents is an irascible curmudgeon; a hundred pounds is A LOT of weight to lose; your career or family life just don’t permit you time to take classes again.

So let’s make some resolutions that are achievable. Losing weight is difficult. Let’s face it, if it were easy, or just involved a “New Year’s Resolution” to achieve, anyone could do it. So scrap the hard part and let’s start with something fun and achievable, like taking the time once a week to have a quiet drink with someone special. You don’t have to go out. You don’t have to dress up. You could conceivably duct tape your children to a chair for the minimal amount of time it takes to enjoy a scotch, neat, or a Grey Goose vodka martini, or a sumptuous White Russian without incurring the wrath of the local constabulary regarding the ridiculous notion that you’re mistreating your children. After you’ve enjoyed the success of making and keeping a resolution for more than the usual three weeks, you can use that newfound confidence and parlay it into achieving a more difficult goal.

Or if you’re the person who goes out to eat on a regular basis, resolve to home-cook just one or two more meals a month. You’ve certainly come to the right place to look for suggestions. Or perhaps you’ve found yourself in an ingredients rut. Resolve to look for, and more importantly use, a new food item each month. Go through the produce section and choose something you’ve never heard of, let alone eaten, and give it a try. It might be delicious, or it could be horrible, but you’ve certainly broadened your horizons. Remember that resolutions are about discipline: the discipline to continue even in the face of unpleasantness.

Speaking of trying a new recipe once or twice a month, here is the recipe for my very own cinnamon rolls. The velvelty texture comes from keeping the dough very soft. The key is to let your mixer do all the hard work. The longer you let the mixer knead the dough, the less flour you will need to use.

Using a heavy duty stand mixer such as a KitchenAid 5 or 6-quart stand mixer, add 2 cups of the flour, the wheat gluten, yeast, sugar, and salt to the mixing bowl and combine by hand. Add the warmed milk. Using the paddle attachment, mix the flour mixture and milk together by hand until the flour has been mixed in. Using the mixer will result in your flour flying all over your counter top. Once the flour is mixed in, mix the batter on medium low (setting 3 out of 10) for 2 minutes. Add the butter to the mixer and mix until it is completely incorporated, then add the eggs, mixing until they are incorporated. Continue mixing for about 6 minutes.

Scrape down the sides of the bowl, add about a cup and a half more flour, and change over to the dough hook. Mix on low (setting 2) until all the flour is incorporated. Allow the mixer to mix several minutes before adding more flour. The dough should pull away from the sides of the bowl, but should remain slightly sticky when you press your finger to it. Add flour a ¼ cup at a time until the dough is the correct consistency. Remember, softer dough equals softer rolls. The mixer should knead the dough for about 15 minutes in total.

Once the dough is done kneading, turn it out onto a dry surface (no extra flour unless it is very sticky) and form it into a ball. Put it in a greased bowl, turning to coat both sides, and place it in an unheated oven with a pan of boiling water underneath. Allow the dough to rise for an hour.

Punch down the dough and cut it in half. Roll the dough into a rectangle about a ¼ inch thick with the long edge toward you. Using very soft butter, brush the surface to within an inch from the far edge (you need it clean so it can stick to the roll).

Cover the butter with the cinnamon sugar mixture. Roll the rectangle on the long edge.

Cut the roll into 12 equal rolls using a thin serrated knife (I use a bread knife for this), and place them on a greased half baking sheet; repeat with the other half of the dough. All 24 will fit on one baking sheet.

Put the pan back in the unheated oven with the warm water to rise for an additional 45 minutes.

Remove the rolls and preheat the oven to 375°F. Bake the rolls for 18 minutes or until they are nicely browned on top. While they are still hot, spread the icing on the pan of rolls. Allow the rolls to cool for half an hour before serving.

*For the icing: 2 cups powdered sugar, 4 T. very soft butter, 1-2 T. heavy cream. Mix the butter into the powdered sugar until the mixture is crumbly. Add the cream, 1 T. at a time until the icing is smooth and the consistency of peanut butter. It should not be runny. 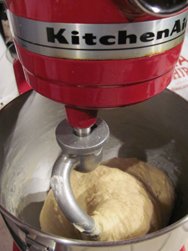 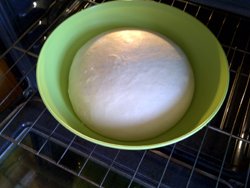 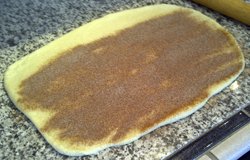 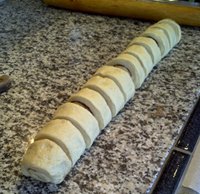 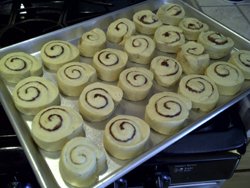